Brett Jones
Twitter
February 1, 2013 Brett Jones is a former Business Development Manager at Arlington Transportation Partners.
SHARE
Facebook Twitter LinkedIn
ATP TAKEAWAY: ATP goes to Costa Rica! Despite almost literally being in a different world, there were some interesting similarities in how people get around. Check it out below!

I feel a little guilty posting this on such a cold, blustery day - but I just returned from a trip to Costa Rica. My girlfriend and I went to escape the cold, and take a break from the rigors of work and graduate school. Still, as a transportation professional navigating a foreign land, I couldn't help but take notice of certain aspects of Costa Rican mobility. During our trip, we spent all of our time in small, mainly rural towns - a vast contrast to the bustling urban environment in and around Arlington. 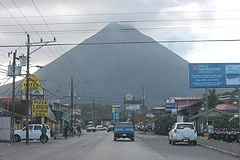 Yet, despite almost literally being in a different world, there were some interesting similarities in how people get around. Tourism is one of the primary industries in Costa Rica, and promoting tourism in a sustainable way is a big part of that. Nearly everywhere we went, we encountered eco-friendly initiatives: green hotels, locally sourced food, wind-farms, human powered mobility. Costa Ricans are keenly aware of their environmental impact, and focused on preserving the natural beauty and balance of their various ecosystems.

Admittedly, we did most of our traveling via rental car. We visited several interesting destinations, a couple of which were difficult to access. Having a car gave us the flexibility to see the country on our own terms – and the added challenge of navigating an unknown area on our own. In each destination, we tried to leave the car behind and explore local areas by foot or via tourist vanpools.  Here are a few observations about transportation, and life in general, in Costa Rica. 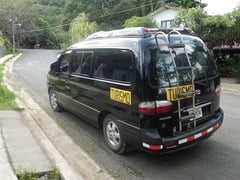 GPS is Your Friend. This is the first thing I noticed about Costa Rica. At least in the rural areas we visited – wayfinding information is very lacking. Roads and intersections are unmarked. Several times, were it not for our GPS unit, we would not even have known the name of the sleepy town we were driving through. Luckily, in many situations, the road we were on was literally the ONLY road to our destination, so it was easy to keep on course. Also – an added bonus, in certain areas, pavement is optional! As far as traffic reducing strategies go, I don’t think I’ve seen anything that works as well as gravel and potholes. On our way to Monteverde Cloud Forest Reserve, we drove for over an hour on unpaved, winding roads, and only saw two or three other cars. 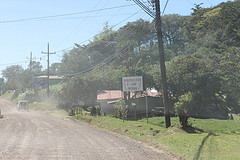 Take Your Time. One of the great things I noticed during our travels was that the pace of life in general seemed to be slower. People in Costa Rica just aren’t in a hurry the way most of us are in the US. This was evidenced by slower speeds on roads, more ‘active’ transportation. Even on major roads, like the Pan American Highway, there is only 1 lane of traffic in each direction, and speeds rarely exceed 80km/hour. 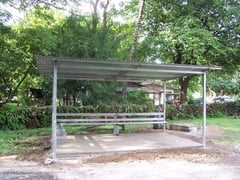 Costa Ricans are PALs. Hopefully you’re aware of Arlington’s initiative to increase awareness for safe cycling and walking by encouraging people to be Predictable, Alert and Lawful (PAL) when interacting with cars, buses, bikes and pedestrians.  In Costa Rica, PAL seemed to come naturally, as cars seemed more than willing to slow down as narrow roads became crowded with walkers, bicyclists and bus stops overflowed with Ticos waiting for a Colectivo to the next town. Safety is even emphasized on the ubiquitous motorbikes on Costa Rican roads, with operators required by law to wear a reflective yellow vest. 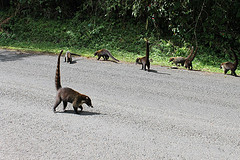 Get on the Bus. In Costa Rica, most people don’t have their own cars. While outside of San Jose and Liberia, most towns are small enough to be traversed by foot or bike, getting between towns is another story. Costa Rica has a very efficient and comprehensive bus system, with nearly every town getting at least one bus connection daily. Perhaps more importantly - most rides are $2.00 or less, even to a city 100 miles away. Imagine a daily public bus from Front Royal, VA to Arlington? Even remote Monteverde, at the end of a 45 mile gravel road, had daily bus service going to San Jose, Tilaran and Puntarenas.

Coati Crossing. More than once we were stopped by packs of small animals, called Coati, that had wandered onto local roads. Most cars were more than willing to wait while these little guys took their time crossing or looking for food. Another benefit of a slower pace of life. Take time to stop, see the animals.