Keara Mehlert
Twitter
October 31, 2013 Keara Mehlert is a former Property & Development Services Program Director at Arlington Transportation Partners.
SHARE
Facebook Twitter LinkedIn
ATP TAKEAWAY: Last week, I had a great time attending the Rail-Volution conference in Seattle - an conference where a diverse group of people involved in the transportation industry gather to share ideas and projects that involve sustainable transportation modes and building livable communities. Read below to hear about some of the highlights that I took away from the conference!

Last week, I had a great time attending the Rail-Volution conference in Seattle. This annual conference gathers a diverse group of people involved in the transportation industry who share ideas and projects that involve sustainable transportation modes and building livable communities. Read below to hear about some of the  highlights that I took away from the conference!

Transit’s impact on economic development was a major theme that came up constantly throughout the conference, starting with the opening session where the King County, WA Executive Dow Constantine stated, “transit is the backbone of our economy”. Many of the workshops brought up the often-publicized trend about the shift towards walkable developments, the decrease in driving by younger generations, and how transit plays a vital role in bringing investment to urban communities. Streetcar and light rail projects 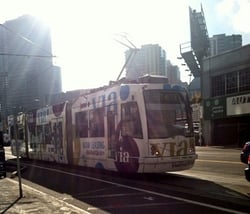 in particular were one of the most popular topics of the conference, with several cities sharing details about the funding, development, and design of their local systems. Places like Tucson and Seattle have seen significant economic growth following the development of their light rail systems, while Denver is planning a new streetcar circulator that will coincide with the major redevelopment of the Union Station area downtown.

In Seattle, the South Lake Union neighborhood has seen nearly $4 billion in investment since the streetcar line (see photo to left) to the area was built in 2007. The area is home to companies like Amazon, Skanska, Novo Nordisk and several other life sciences organizations, with the streetcar as a major impetus for development in the previously neglected area. Multi-family residential development has also increased the number of housing units in the area, while several streets and sidewalks were redesigned (photo at right) to make it more bicycle and pedestrian friendly.

Another topic that was interesting to hear about was the “first mile, last mile” issue faced by transit riders and how it can be addressed. Three different sessions focused on the topic alone and showed how transit agencies are starting to think about their customers beyond their routes and how to make it easier for riders to get to and from their final destination. The main challenge with first mile and last mile issue is getting riders to transfer, either to another transit service or another mode to get them where they need to go. Throughout these sessions I heard about solutions such as bikeshare being a great complement to transit systems, the need for partnerships with local transit agencies to connect from transit hubs as seen in Portland with TriMet, and also how creating safe, walkable areas is crucial to supporting pedestrians making that final leg of their trips from transit, as described by Tulsa’s Accessible Mobility Coalition. Finally, transportation demand management (TDM) strategies, like those we promote here at ATP, were discussed a couple of the sessions, and it was great to hear what other cities have done to alleviate congestion and encourage sustainable transportation modes. As one presenter said about transit oriented development (TOD), “you can’t expect people to make the switch [from driving] just because you have shiny new buildings and pretty sidewalks”. In Seattle, where they have no subway but rather a robust bus system and a couple streetcar lines, the drive alone rate for commuters dropped from 50% to 34% between 2000 and 2012 through Commute Seattle’s outreach to employers and property managers in the downtown area. In addition to assisting employers in providing transit passes to commuters, Commute Seattle conducted an inventory of bicycle facilities at downtown office buildings, looking for things like racks, showers, storage, etc. They then used this study to work with property owners and managers on how implement these types of amenities in their buildings and encourage bike commuting among employees. In addition, presenters discussed various other solutions such as car sharing, smart parking strategies, and engaging commuters through promotional events and activities.

Throughout the three-day conference, I heard about so many great new projects and initiatives that various cities are implementing, however, it’s clear that Arlington’s history of transit-oriented development still sets itself apart from the rest. While other places have more recently bought into the benefits of TOD, Arlington has been a model for this type of development for over thirty years, taking advantage of a strong transportation network and implementing progressive planning policies. However, as seen in the new projects and innovations at Rail-Volution and in other cities, we have to keep working and improving our services to maintain Arlington as a leader in TOD and continue to attract workers, residents, and visitors.