Arlington Plans for a Bright Future in Courthouse

While certain comments recently made the claim that Arlington is a “soulless suburb,” many of those who live, work and visit the County’s urban villages would likely disagree. Areas such as Rosslyn, Ballston and Crystal City have seen new energy injected into the neighborhood, thanks to their active Business Improvement Districts, County planners and engaged real estate developers. Public spaces such as the Waterpark in Crystal City or the planned Metro Plaza in Ballston have become important to bringing vitality and street life to these urban areas.

Courthouse, however, remains one of the few areas in the dense Rosslyn-Ballston corridor that has many sites ripe for development and redesign. Despite numerous employers and multi-family properties (including 3 brand new residential buildings: Tellus, 19Nineteen Clarendon and 2001 Clarendon), the neighborhood still lacks a welcoming public gathering space and urban design features that would encourage interaction and placemaking.

Civic Engagement for Courthouse
Arlington County, recognizing this opportunity and need for the community, has started the civic engagement process to update the Courthouse Sector Plan. The Envision Courthouse Square project is a “community planning effort to re-imagine the County’s civic center and create a great public destination.” The project’s 10 acre study area includes County office buildings, the AMC movie theater and the Courthouse and Verizon Building plazas, all of which surround the County-owned surface parking lot in the center.

The project, which has already held several working group meetings and 3 community workshops over the past year, focuses on 6 primary elements that are essential to the success and vitality of the Courthouse neighborhood. These include: open space, building use, building location and design, circulation and parking, cultural resources and sustainability. Unlike the Realize Rosslyn sector plan update, which focuses on transforming the neighborhood’s streetscape to make it a less auto-oriented community, the Envision Courthouse Square project places more emphasis on identity, community and maximizing open space. 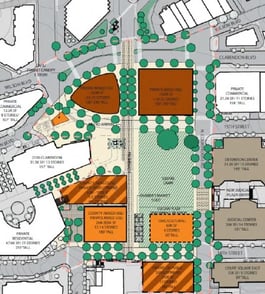 Courthouse Concept Plans
The most recent concept draft plan incorporates a pedestrian “promenade” and open space where the parking lot currently exists, along with a cultural “plaza” and market on one end. The plan also envisions a mix of both public and privately-owned mixed-use developments with higher densities than most of the surrounding commercial buildings.

Ultimately, the plan seeks to provide guidance on the future of the Courthouse neighborhood and lay the groundwork for additional real estate development, retail market and community events in the area.

Like its neighboring communities, the revitalization of Courthouse will continue to build Arlington’s reputation as one of the best counties to visit, work and live in the Commonwealth.