Brett Jones
Twitter
July 19, 2013 Brett Jones is a former Business Development Manager at Arlington Transportation Partners.
SHARE
Facebook Twitter LinkedIn
ATP TAKEAWAY: The Next Generation of Bicycle Friendly Building Design, an event hosted by the Urban Land Institute, was geared primarily toward real estate professionals, and provided information about the growing popularity of bicycling both as a commuting mode, and as a mode for everyday trip making.

Last week, I attended an Urban Land Institute hosted event - The Next Generation of Bicycle Friendly Building Design. The event was geared primarily toward real estate professionals, and provided information about the growing popularity of bicycling both as a commuting mode, and as a mode for everyday trip making. Panelists covered a variety of topics, speaking to a sold out room, about a number of bicycling trends and innovations.

Shane Farthing, Executive Director of the Washington Area Bicyclists Association (WABA) discussed biking's growth as a response to a number of market signals - health, cost and environmental. Cities are starting to realize that they must plan for the growing numbers of cyclists. He emphasized the role of biking and bike infrastructure in helping us manage the stress of increasing populations – creating bike infrastructure takes up less space than roads, and important issue for managing capacity in areas that are largely built out. Shane also suggested that to achieve a critical mass, cities need to focus on creating roadways that cyclists feel safe on – creating spaces that feel like trails, even though they are on the street.

Still, hard infrastructure is not enough. In order to encourage bicycling on a greater level, bicyclists need access to amenities that make biking a practical solution once they’ve reached their final destination. This is where the developer community comes into play. Tony Greenberg with local real estate developer The JBG Companies talked about ways in which his organization is incorporating bike amenities and infrastructure into their developments, including site selection near bike routes, incorporating showers and innovative bike parking solutions. He used as examples specific projects in Seattle that are marketed specifically to the bicycle community.

In short, developers can make decisions that help treat bicycling like a dedicated mode of transportation, and not just a novelty. To do that, though, there needs to be demonstrated value in designing for bikes. To date, very little research exists on the return on investment for bike infrastructure, or on how bike amenities can command increased rent premiums. 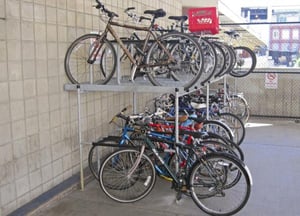 Jennifer Toole, President of Toole Design Group discussed ways in which employers can get into the act, through site location, and offering amenities such as biking and walking incentives to employees.

In Arlington, many employers and developers are on the cutting edge. Arlington is a certified Silver Bicycle Friendly Community, awarded by the League of American Bicyclists. Not only that, there are 19 certified Bicycle Friendly Businesses in Arlington. The demand for bicycle friendly design is growing rapidly, and showing now signs of slowing down. One need only look at the runaway success of Capital Bikeshare as an example. Developers and businesses have a tremendous opportunity to take advantage of this rising tide, and incorporate bicycle programs and infrastructure into their building designs and benefit packages.