Brendan Casey
Twitter
April 27, 2015 Brendan Casey is a former Business Development Manager for Arlington Transportation Partners.
SHARE
Facebook Twitter LinkedIn
ATP TAKEAWAY: If you need help finding a better commute option, ATP can help. You don't have to drive alone to get to work, with services like Bridj, there are tons of great options!

Editor's Note: As of May 1, 2017, Bridj has discontinued service in DC. Check out their website for more information.

Read on below for a past review of their service in DC.

So I switched up my usual commute this morning and ditched my bike for the chance to try out Bridj, a Boston-based startup that creates pop-up bus transit, since it just launched in DC. The company offers flexible shuttle routes that adapt based on the locations of who has booked a ride during a given period of time. Depending on who is using Bridj in your neighborhood on a particular day, your pickup location can be relocated to optimize efficiency while making sure that you never have to walk more than ten minutes for your stop. Bridj has launched in DC with limited morning service between the greater Capitol Hill and Dupont Circle areas and is running 20 minute intervals for the time being. 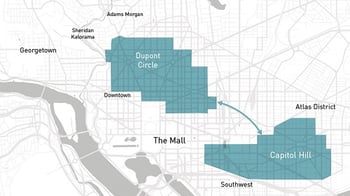 I received an email from Bridj last week about their DC launch and downloaded the app last night to book my morning ride. The process was straightforward and didn’t cost me the normal $5 price due to the “freeindc” promo that the company is currently offering. I booked this ride simply to try out Bridj since I’ve been hearing its name dropped in transit circles for the past couple of years. I work in Rosslyn so a shuttle from Capitol Hill to K St NW isn’t perfect for me but it was still very useful and brought me right to McPherson Square where I caught the Metro for the last leg of my commute.

Bridj touts that it has cut some commute times in half through routing and bus stop optimization but did it do so for me? My Bridj had a scheduled pick up at 7:22am just over a quarter mile from my apartment in Capitol Hill. I walked out the door at 7:15 and arrived to my assigned pickup location less than five minutes later. As my watch turned to 7:22, I noticed a large white shuttle approaching. Sure enough, it came to a stop where I was waiting and I noticed the “BRIDJ 31” decal on the door. I hopped on board and the driver, John, checked the boarding pass on my phone. As I settled in, John asked me how the temperature was in the cabin and let me know which network to use for free Bridj WiFi – so far, so good. The one small snag was that the vehicle GPS wasn’t working so I wasn’t able to see how far away it was before I got on board. I messaged the Bridj team during my ride about this glitch and received a reply literally five minutes later stating that they were working to address the issue. The ride was smooth and comfortable and I arrived at the drop-off location just under 15 minutes later – not bad at all for a cross-town morning drive. After catching the Metro, I walked into my office at 7:54. So, 39 minutes door-to-door this morning and I could have left my apartment a little later and still been okay on time. Normally, my bike ride from Capitol Hill to Rosslyn is around 25 minutes and then I need to shower and change, which can add 20 minutes to my overall “commute” time. 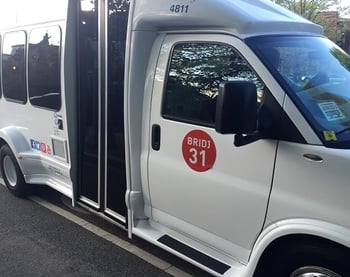 It goes without saying but bike commuting offers many health, wellness, fiscal and environmental benefits that cannot be ignored. On the rare occasions that I Metro to work, it can be pretty unpredictable on the Red Line from Union Station to Metro Center before I transfer to the Blue/Orange/Silver Lines for the rest of the journey. The uncertainty and overcrowding that is common on the Red Line can cause my door-to-door commute time to be upwards of 45 minutes occasionally – still not terrible when you consider the stressful, traffic-filled alternative of trying to drive alone to work!

Overall, I am really pleased that Bridj has come to the DC region and is increasing mobility options for people here. My particular commute was not drastically faster with Bridj but I know that there are plenty of people who will benefit from the improved Capitol Hill to DuPont Circle connectivity it is currently offering. I’m very eager to see where Bridj plans to expand service in the region over the next few months. North – South Arlington connectivity could potentially benefit and the company could help alleviate the “Blue Line Blues” that occurred due to the Silver Line decreasing Blue Line frequency. It would also be really great to see Bridj data integrate with regional transit planning services like CarFreeNearMe.com and CarFreeAtoZ.com.