Carpools: Not Just For Soccer Practice

Keara Mehlert
Twitter
December 6, 2012 Keara Mehlert is a former Property & Development Services Program Director at Arlington Transportation Partners.
SHARE
Facebook Twitter LinkedIn
ATP TAKEAWAY: If transit, biking, or walking are not great commuting options for you, how about carpooling? Read to learn more about the benefits to carpooling and what employers can do to promote carpools among employees.

With over 140,000 employees working in Arlington, the county has become a major employment center in the region as more and more companies seek to locate in an urban and accessible area. While trends have shown that more people are choosing to live near where they work, nearly 70% of Arlington employees actually live outside of the county. For many, driving may the only viable commuting option, as public transit, biking and walking may not be the best or easiest way to get to work. However, carpooling (or ridesharing) with neighbors or other coworkers is a great alternative to driving alone and can be beneficial to workers and their employers.

Despite the known advantages of ridesharing, commuters may hesitant to join or start a carpool for a variety of reasons. Lack of convenience (i.e. not being able to leave when you want to, what to do in case of an emergency while at work) and difficulty in finding other people who live and work in the same area are commonly cited reasons for not wanting to carpool. However, as described below, there are several benefits that can have a positive impact on your wallet, your mental health, and your work productivity. In addition, there are various initiatives that employers can implement to promote carpooling and help employees improve their commutes. 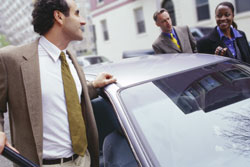 Like transit, biking, and walking, there are significant advantages for commuters who choose to drive less and use an alternative mode for getting to work. Carpoolers can save a significant amount of money by splitting the associated costs of driving to work such as gas and parking. Also by driving less, those who carpool can reduce the wear and tear on their cars, therefore saving money on maintenance and other costs. In addition to saving money, commuters who carpool can also save time when riding with others. While single occupancy drivers often have to sit in traffic during rush hour, carpoolers are able to take advantage of the many HOV and HOT lanes throughout the region, including the new 495 Express Lanes that recently opened. Bypassing the gridlock in regular lanes allows carpools to get their destination quicker and reduce the time spent commuting. Carpooling also can have significant benefits on employees’ mental health as well as impacts on work productivity. By avoiding traffic during your commute, you can reduce stress and arrive at work in a better mood, which can encourage more productivity and improve your company’s bottom line. Finally, if one has to unexpectedly work overtime or if an employee must leave work due to an emergency, the Guaranteed Ride Home program gives those who ride transit or carpool at least twice a week the peace of mind that they will be able to get home. The GRH program, which offers four free cab rides home a year for unscheduled overtime or emergencies, can be especially helpful to carpoolers who may be dependent on someone else for a ride after work, or are responsible for driving other people home.

There are many things businesses and developers do to promote carpooling among employees and tenants. Offering preferential parking spots or reduced/free parking fees for carpools can be attractive benefits for employees while also reducing the number of parking spots needed on a daily basis. In addition, employers can provide an incentive to carpoolers or promote programs such as ‘Pool Rewards' through Commuter Connections, which offers a financial reward to eligible commuters. Companies can also facilitate carpool formation through office events or intranet websites, so employees can see if there are other people who live near them.