Coded In Law: Challenges for Pedestrians and Cyclists

Micah Denton June 3, 2013 This post is written by guest contributor, Micah Denton, and is cross-posted at his blog, The Mechanic Speaks. Micah got his cycling start on mountain trails and has been a transportation-cyclist since 2007; he is currently a senior civil engineering student and enjoys riding near his home in Arlington, VA.
SHARE
Facebook Twitter LinkedIn
ATP TAKEAWAY: This blog post is the second in a series about cultural attitudes towards transportation and their impact on individual mobility.

After concluding in Part I that non-motorized road users have a theoretically equal legal and moral right to public roads alongside cars, it’s now time to look at how this actually plays out in reality.

Pedestrians are legally entitled to walk on the road when (and only when) there is no sidewalk available, which seems perfectly reasonable. If there is no shoulder present then pedestrians must “yield” to cars (see 506d), presumably by getting o 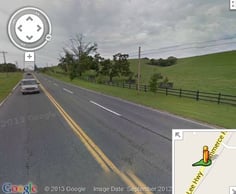 ff the road entirely. For a rural road with no shoulder and any medium or greater flow of traffic, this constitutes a severe limitation on a pedestrian’s “right” to public roads. Sidewalks can be vanishingly uncommon in America outside of city centers, which greatly reduces the usefulness of a huge portion of roads for travel by foot. Here is a look at a semi-rural section of Virginia Highway 11 in the Shenandoah Valley. I picked a point about 3 miles from the center of Staunton, VA (pop. 24,000) and about 2 miles from Verona, VA (pop. 4,000). It is reasonable to think that a person might walk to either town along this road. The lack of even a narrow shoulder is a particularly glaring omission considering that enough lane space was made available for a climbing lane.

The next picture is another example of road infrastructure lacking pedestrian facilities. I took 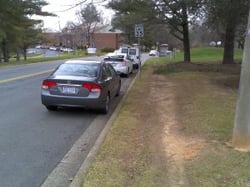 this picture (see left) on a residential street in Reston, VA, a suburb of the DC metro area. There is a bus stop with a newspaper box visible directly ahead and the side path in the grass is well worn, showing regular use. There are no sidewalks on either side of the road, despite having a sufficiently wide right-of-way to provide space for free street parking. The presence of free street parking is a tremendous and typically unacknowledged subsidy to drivers. In his book, “The High Cost of Free Parking,” Donald Shoup 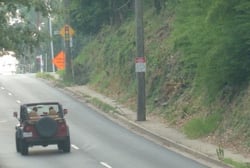 estimates the annual value of free parking at $127 billion. Yet despite the huge cost of this free service for drivers, pedestrians are too often given little consideration.

Where sidewalks do exist, they sometimes may not be particularly useful due to bad design or poor maintenance. See photo to the right, located in Arlington, VA.

Compared to pedestrians, cyclists have a much more active advocacy bloc and cycling is seeing a surge in popularity in metro areas across the US. Legislative progress, however, remains slow. The 2013 Virginia General Assembly saw three bills presented that would have encouraged cycling. These included an anti-dooring bill, one aimed at drivers following too closely, and one mandating that drivers exercise due care. All were defeated. This was hardly unexpected: I attended a townhall early this year where legislators predicted that votes would split roughly along the urban/rural divide, which proved mostly accurate. This highlights an important characteristic of regional attitudes towards transportation modes that will be the topic of a future post.

If the law seems less than supportive of vulnerable road users, drivers can be far less so. A recent “sting” was conducted by Montgomery County police targeting drivers violating the right-of-way of pedestrians in crosswalks. “Sting” is in quotes here because the operation was advertised in advance and officers wore brightly colored clothes, both efforts aimed at giving drivers every chance to avoid a ticket. Crosswalks are the only road areas where pedestrians are given real protection by law, making the great number of violations that much more remarkable. A similar “sting” was conducted in DC on Pennsylvania Ave targeting illegal U-turns across the centrally located bike lanes. The extremely high rate of illegal U-turns continues unabated.

The laws discussed here help to reveal that the ideal of freedom of movement is often curtailed significantly for certain groups of road users. Oftentimes these laws hew closely to broader public attitudes towards transportation.