Keara Mehlert
Twitter
July 24, 2012 Keara Mehlert is a former Property & Development Services Program Director at Arlington Transportation Partners.
SHARE
Facebook Twitter LinkedIn
ATP TAKEAWAY: The Arlington County Board voted last night to approve the plans for a streetcar system on Columbia Pike. What do you think about the project?

A light-rail streetcar system on Columbia Pike is moving closer to reality! Last night the Arlington County Board approved the streetcar plan as the "Locally Preferred Alternative", and the project can now move ahead and begin to secure funding. As you may have heard in the news, the Columbia Pike streetcar plan, or Pike Transit Initiative, has been a contentious issue for the past few months, as supporters and opponents have debated the benefits and return on investment of a streetcar versus other alternatives, such as articulated buses. However, following several reports and public meetings, the County Board's vote (with 1 abstention) indicated that they believed the project would be a positive addition to the southern portion of Arlington County, despite previous concerns about costs and displacement of low-income residents.

While the streetcar won't be in operation for another four or five years, the five-mile route will connect the Bailey's Crossroads/Skyline area in Fairfax County with Pentagon City at the east end of Columbia Pike. Currently, the buses that serve the area are at capacity, and simply adding new buses will only increase congestion and travel times for riders. The streetcar system, however, will provide higher capacity transit service and improve access for residents and workers to various destinations along the Pike as well as in DC and Fairfax County. The streetcar will also improve travel times for commuters, reduce the number of cars on the road, and spur economic development along the corridor. 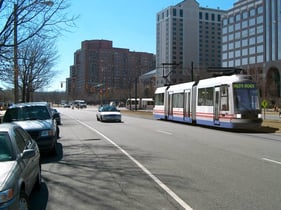 As a new resident of Columbia Pike and a huge fan of the area, I think the streetcar will be a great addition, especially with all the projected growth that is expected, it will serve so many residents and businesses when completed. Now we can only hope that the Crystal City-Alexandria streetcar, which would ultimately connect with Columbia Pike's streetcar, moves forward as well!

What do you think about the plan for a streetcar on Columbia Pike? Do the potential advantages outweigh the concerns?