My Experience in Multi-Modal Copenhagen

My boyfriend and I decided to spend Christmas week in Copenhagen because we are both bicycle-as-transportation advocates, and there are few cities that do biking better than Copenhagen. The city is known as “The City of Cyclists,” and with good reason – a third of the population uses bikes for transportation. Flat terrain and bicycle-friendly infrastructure are only two of the many reasons why biking is so popular in this city. However, the bicycle amenities were just part of the transportation attractions in Copenhagen – the public transit system was unlike anything I had experienced and was a joy to ride.

Our rental apartment was in a great location and was accessible to three bus routes and two S-tog, or S-train, stops. The buses on all the 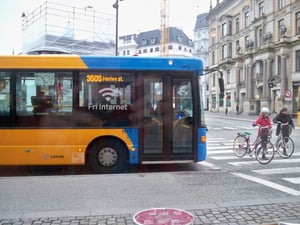 routes ran every 10 minutes, even on Christmas Day and on Sundays, and were clean and quiet. I observed several different payment methods, from the old-fashioned paper 10-ride “clip cards” that we used, to a ticket that was downloadable to passengers’ smart phones; I saw several people wave their phones at the drivers. Others flashed cards or large pieces of paper, and every bus and metro had big blue dots that appeared to be a smart card system – you tagged in and out on them as you entered and left. Each bus had an area for wheelchairs and baby buggies to park, right next to a back door (or sometimes middle door if the bus had three doors). There were frequently multiple baby carriages on the buses, and passengers were amazingly patient while parents jostled them on and off full buses.

The S-trains had bicycle-specific areas in the last car of each train, with a designated spot for bikes to wait on the platform (the other regional trains have different rules). There were no bike racks on buses, but with bike lanes on every street throughout the city and S-trains with bike-only sections, there would really be no need to put your bike on a bus. The bike lanes were in between the bus stops on the sidewalk and where the buses actually stopped on the street, so bus passengers had to enter and exit the buses through the bike lane. This would probably create quite a fuss here, but cyclists simply stopped or carefully moved past, and bus passengers looked before stepping into the lanes. The buses and trains also included free Wi-Fi – there is a system-wide network that you can access once you register. What a great amenity, to offer free Wi-Fi while you are going to or from work! This, along with long upholstered seats and overhead racks, make for a very comfortable commute. And did I mention how quiet the buses and trains are? You really don’t notice how loud the WMATA buses and metro trains are until you are someplace where the vehicles are virtually silent. The bus drivers all played music, softly, and yet we could still 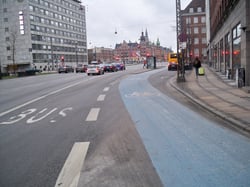 hear it in the back of the bus.

It was refreshing to see people at ease with using so many different forms of transportation in Copenhagen. Unlike the Washington, DC, area, where bicycles, wheelchairs, and baby strollers are considered an annoyance on public transportation, it was impressive to see how calm and accepting everyone was of each other. Rule #1 for biking in Copenhagen, according to the city’s bike map, is “Spread positive karma.” As it says, “It doesn’t take that much to spread good karma in traffic so everyone can get out and about.”

This message isn’t that different from the PAL (Predictable, Alert, Lawful) campaign promoted by Car-Free Diet, BikeArlington, and WalkArlington, which encourages respect and courtesy for drivers, pedestrians, and cyclists. While our region is not on the same level as Copenhagen as far as transportation amenities (yet!), whether you drive, bike, or walk, add being a PAL to your New Year’s Resolutions, and let’s make it safer and easier for everyone to get around Arlington.