Arlington Transportation Partners
Home >> Blog >> My New Commute(s): Why I Love Having Options

My New Commute(s): Why I Love Having Options

Keara Mehlert
Twitter
July 16, 2013 Keara Mehlert is a former Property & Development Services Program Director at Arlington Transportation Partners.
SHARE
Facebook Twitter LinkedIn
ATP TAKEAWAY: Living in Arlington over the past year has given all the convenience, accessibility, and affordability of a car-free lifestyle. Here are some transit alternatives worth exploring.

Living in Arlington over the past year has given me the convenience, accessibility, and affordability of a car-free lifestyle. I became familiar with local bus routes, trail shortcuts in my commute to work, and the short walk to stores and restaurants. However, I recently moved back across the river to the U Street area in DC, losing the familiarity and routine that I had become accustomed to. One change that I was not looking forward to was my commute – I had been really enjoying my seven mile round trip bike ride to and from work, which was faster than taking the bus or Metro, and gave me an extra 40 minutes of exercise each day. When I moved, I definitely wanted to keep biking; however, I was not looking forward to finding a new (and longer) route and figuring out DC streets. Luckily, several of my coworkers were able to help me out and gave me a few different route options for biking from my new apartment to the office in Rosslyn. In addition to commuting by bike, the move also forced me to do some research to figure out my transit alternatives in case it was raining or I wasn’t able to ride in for some reason.

After several conversations, some Google mapping, and research, turns out I have multiple options for commuting! While biking is still my primary transportation mode, I now have several backup choices and routes that I can take when things don’t go as planned. 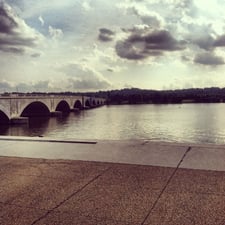 Bike
I even have more than one option just on my bike! I ride in to work pretty much every day, and have gotten more and more comfortable with the two route choices I can take. Typically, my route depends on timing – if I want to get to and from work quickly, I’ll ride through Dupont and Georgetown, which gets me to work in about 25 minutes. If I have a little more time to spare and want some additional exercise, I’ll take the “scenic” route, which is almost two miles longer and goes across Memorial Bridge, along the reflecting pool, and up the 15th Street cycle track.

Transit
On the few days that I don’t ride my bike in, I have the option of taking Metro into work, which takes about the same amount of time as biking. While I can always jump on the Yellow Line at the U Street station, I prefer to be above ground for most of my commute so I ride the Circulator bus down 14th Street to the McPherson Square station, and from there it’s only three quick stops to Rosslyn. When I commute back home after work, downtown DC during rush hour is not always the best place to be in a vehicle, so I’ll ride Metro all the way back to U Street to avoid the crawl back up 14th Street. 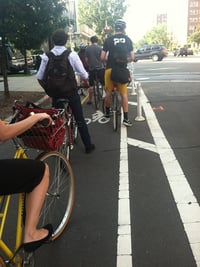 Capital Bikeshare
While I don’t plan on riding Capital Bikeshare all the way to work, my membership came in handy last week during my commute home on a day I didn’t ride my bike. After getting off at McPherson, the bus I was on had been at a standstill for an agonizing 15 minutes due to congestion from nearby road closures. I jumped at the first chance I had to get off and went right to the nearest Capital Bikeshare station and pedaled the last leg of my commute home. CaBi definitely saved me time and my sanity that evening!

Knowing several different ways to get to and from work has been so helpful in saving me time and reducing the stress that can come from frustrating delays, traffic, and inclement weather. I know that not everyone lives in such an accessible area – for some commuters, there simply aren’t as many transportation options. However, having just one alternative or backup plan for your commute can be beneficial when the unexpected arises. Take a few minutes to research the options near you, whether it’s a commuter bus route, a Capital Bikeshare station, or a local carpool group. You can also request a Personalized Commute Planner from ATP – we’ll find the best routes for you to get to work on transit, biking, or walking. Get started today and be prepared - who knows, you might enjoy your newly discovered commute even more than your original one!