Brett Jones
Twitter
April 30, 2013 Brett Jones is a former Business Development Manager at Arlington Transportation Partners.
SHARE
Facebook Twitter LinkedIn
ATP TAKEAWAY: In mid-April, I had the fortunate opportunity to represent Arlington Transportation Partners in Chicago, IL at the American Planning Association National Conference. This conference was attended by thousands of city planners, transportation planners, government officials and others focused on building great cities. Here are details from the conference.

In mid-April, I had the fortunate opportunity to represent Arlington Transportation Partners in Chicago, IL at the American Planning Association National Conference. This conference was attended by thousands of city planners, transportation planners, government officials and others focused on building great cities. At any given time, there were presentations on bicycle programs, transportation funding, building complete streets, community engagement, water conservation and the dreaded 'D' word - density. Among them was me, a transportation demand management professional, who happens to also be an urban planning student, trying to navigate the sprawling conference rooms of the Chicago Hyatt. 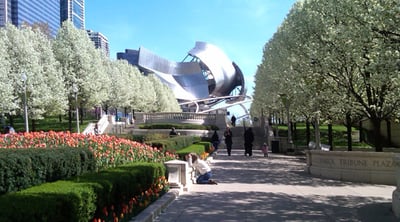 I'll be the first to admit that I found myself almost immediately overwhelmed. Each 'session' included over a dozen presentation options to choose from. At the risk of overwhelming you, the reader, I wanted to share some of the highlights. But, sparing you the pain of reading in detail about every wonky session I attended...I'll try to keep this fun, by only repeating the information I felt worthy of communicating via Twitter.

My first tweet came before I event attended a single session:

An #APA2013 irony: a session on density was over capacity. People being turned away.

Yes, the first session I tried to go to, about increasing density in cities, did not have room for me.

Things quickly improved, however. Later that day, during a session called Reinventing Neighborhoods with Transportation Investment, I learned about efforts in Cleveland to make transit more appealing:

Personally, I'd be more than fine if all DC area Metro stations smelled like mangoes. Later on, I found myself learning about ways to improve safety for pedestrians and cyclists, something dear to Arlington's heart (read here about the PAL campaign). One presentation in particular focused on Chicago's ambitious plans to eliminate pedestrian fatalities, through a focus on increasing the connectivity of neighborhoods:

Chicago's 'Zero in Ten' plan aims to reduce pedestrian fatalities each year to zero within 10 yrs. Focus on connectivity. #APA2013

The same session also included great discussion on one of my favorite topics: how to build 'walkable neighborhoods': 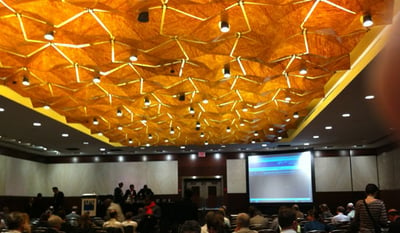 I became intimately familiar with this, and other conference rooms

It struck me during this presentation exactly how well Arlington represents a positive model for this type of development, given its focus on Urban Villages and transit oriented development. A session on site-plan review made me particularly thankful for the work Arlington does - other jurisdictions seem to pay more attention to building design, and ignore aspects of how development fits into a community, and creates access to transportation options:

Of course, over four days of conference, there was much more that I learned, shared and experienced. It was a great conference, and I enjoyed the opportunity to connect with planners from throughout the country, and hear about innovative transportation strategies. And, Chicago was a great host - one of my favorite cities to walk around, with some excellent dining opportunities! My only real complaints for the week were the lack of conference WiFi, and the horrible weather that cancelled two of my flights and kept me in Chicago an extra day. Both are small prices to pay for the amount of knowledge gained!