The Value Of Time During Your Commute

Keara Mehlert
Twitter
December 4, 2013 Keara Mehlert is a former Property & Development Services Program Director at Arlington Transportation Partners.
SHARE
Facebook Twitter LinkedIn
ATP TAKEAWAY: While the distance and time it takes to get to work can be significant factors that determine which mode of transportation one might take to commute to work, it’s also how one is able to spend their time during their commute that determines their choice of transportation.

A recent Canadian survey revealed that most commuters believe a reasonable one-way commute to work should take no longer than 30 minutes. In addition, many employees even said they would be willing to work an extra three hours a week if they had a shorter commute! This 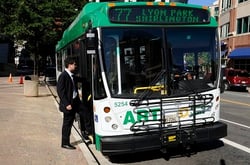 study highlights similar trends seen here in the U.S. as more workers want to live more convenient and accessible areas, and don’t want to spend valuable time traveling to the office each day. According to the 2013 State of the Commute for the DC region, the average one-way commute time was 36 minutes, although 22% of survey responses travel 45 minutes or more to get to work. 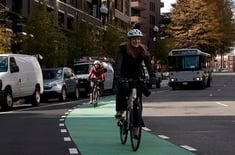 o take, it’s also how one’s time is spent during their commute that can make a difference on their overall happiness, health, and work productivity. For example, it might take the same amount of time to drive to work as it does to ride Metro; however, can you read, check email, knit, nap, etc. while driving? Hopefully not! Riding public transit or car/vanpooling may not give the door to door convenience of driving, but you can do a lot more on the train, Metro, bus, or ridesharing. For those who bike or walk to work, it may take longer than driving, but think of all the extra exercise you can incorporate into your workday. Sure saves time going to the gym later on!

What is your ideal commuting time and how valuable is that time to you?