Why the Struggle is Real (Especially Today)

Maggie Awad
Twitter
March 16, 2016 Maggie Awad is the former Marketing Director at Arlington Transportation Partners.
SHARE
Facebook Twitter LinkedIn
ATP TAKEAWAY: All aboard the struggle bus. We get it, it’s hard out there when it comes to choosing your transportation options.

As the news of the Metro shutdown spread yesterday, all I could hear on my commute home was whispers of disbelief that an entire system/mode was being shut down. Midweek. For more than 24 hours. Unbelievable. And as I totally creeped on other people’s conversations, I commiserated, because even as a transportation demand management professional, it’s rough out there. In fact, some of ATP’s most popular blogs have come from my own experiences on public transportation.  Without a doubt, I will admit that I completely get flustered when my first mode of choice doesn’t pan out and yes, it’s easy to mutter under my breath, “Seriously, WMATA?”, but the truth is that even though the DC Metro region’s public transportation options are plentiful (just look at this fun graphic of all the different modes in the region), the struggle is real and ATP understands.

But why is the struggle so real with SO MANY options? While it’s easy to point a finger at WMATA, maybe we need to take some responsibility too?

All Aboard the Struggle Bus 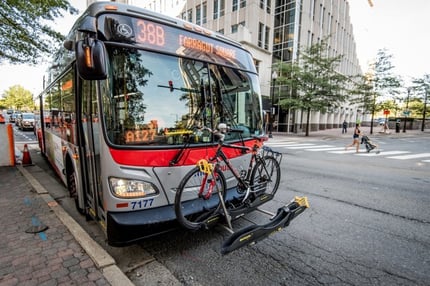 Or not… When Metro announced their shutdown, it felt like the end of the world, but here’s the hard truth. It wasn’t the entire Metro system – Metrobuses are still running. While taking a bus will most likely increase commute time and be harder for riders coming from the end of Metrorail lines (especially those utilizing the park & ride lots), the real problem here is that for some, bus isn’t an option due to a perceived bus stigma. Issues of race, class, cleanliness, safety – it’s all there, whether you want to admit it or not.

Truth be told, I prefer the bus over rail when traveling through the city and Arlington. For me personally, it’s just a more reliable and convenient service with consistent phone service available, but there isn’t a week that goes by when I don't hear someone friends or family admit that they’ve never been on a bus. Just last week, my sister, who has lived in the DC Metro region her entire life, asked if I would take her around the city on the bus sometime. She’d never been on one before. I was flabbergasted and all too quickly agreed that we’d have a bus exploration day...if for no other reason than to convert one more person to loving the bus.

When it comes to change, it’s hard. In fact, researchers say that if you’re going to ask someone to change something about their daily habit (or in our case, your daily commute), you should ask them when they’re already going through a major life change like a new job or during key life events/holidays like birthdays or New Years.

But Metro shutting down for a day isn’t a major life change, yes a major pain, but not a major life change. So when your primary mode is cut from your options, it can not only feel hard, but rather impossible to find a way to get to work. ATP even stopped and stuttered a bit yesterday to think how we’d get to work or to events after work, sans Metro. Thankfully, most of us know our alternate routes fairly well, but we’re the minority. We're probably the extreme minority knowing not one, but up to three or four ways to get home in a pinch if our primary mode is shut down or inoperable.

If you made it to work today on a secondary/alternate mode, treat yo self to something fancy today! But if you defaulted to driving alone, taking unscheduled leave or pulling out entirely too much hair, contact us – there’s a reason we’re the country’s leading experts in transportation demand management. We help people on the regular and if anything, you’ll be ready for the next time you can’t take Metrorail to work or home.

The More You Know

When it comes to your daily commute, ignorance is not bliss. And while we’d gladly talk until we’re blue in the face about all the resources available to help you get real time transit info, the struggle will continue until you take the time to educate yourself. I’m not talking about endless hours of study, just download some apps and have them on hand when you’re in a real pinch. Or finally get on board when it comes to the sharing economy and try out Capital Bikeshare or car2go. Yes, you might need to take a little time to sign up for a few services before you’re ready to try them, but I promise that you’ll be glad you did when the time comes to evaluate your options.

Lastly, we do not want to diminish or down play the fact that for many, without Metrorail, there is just no other option. So if you must drive, try to identify others in your office who you can carpool with or if you're feeling bold, slug it. Any way you go, ATP can help you commute in, out and around the County.

So at the end of today, after you’ve grumbled a few more times about Metro at the water cooler, take a step back and think about your options. While they may not be glamorous or as fast as Metrorail, especially when commuting outside of the core, it’s not impossible.

ATP fully recognizes it’s hard out there, the struggle is beyond real, but that’s also why a team like Arlington Transportation Partners exists. We’re here to help. Let us help you eliminate the struggle.