Why You Should Care About Other Modes Now

Maggie Awad
Twitter
February 15, 2017 Maggie Awad is the former Marketing Director at Arlington Transportation Partners.
SHARE
Facebook Twitter LinkedIn
ATP Takeaway: Education and positive safety messaging are key to changing thoughts and behavior and increasing awareness and responsibility across all modes. See why you should care now and not when someone you know gets injured.

Last night, I was biking down 14th Street in the bike lane and was halfway doored by a SUV that had pulled partially into the bike lane to drop off some passengers. I say halfway because I was able to slow my speed enough that the impact wasn’t completely jarring and only caused me to fall in the sense that I stepped through the frame and did that little hop, jump landing. The passenger who opened the door did ask if I was okay and apologized, but I was so rattled that all I could manage to say was “You have to be more careful!” In reality, my adrenaline was pumping so hard that I wanted to curl into a little ball as I was terrified of what had happened. After I arrived at my destination and the adrenaline cooled a thought I’ve had for the last few months, came bubbling up to the top:

The vast difference in driver education and biking/pedestrian education is what causes this rift between modes.

And the sad reality of it all, is that you’re not likely to care about another mode (especially if you don’t use it yourself), until someone you know is injured or worse.

So What Can We Do?

A lot of things, actually.

First and foremost, we need to rethink the driver, bike, pedestrian education process. There needs to be an overall sense of inclusiveness, instead of caution and warning. Admittedly, it’s been well over 15 years since I took my driver’s education course in North Carolina and where I grew up, there are no such things as bike lanes. In fact, we had one bus that ran a single loop with three stops. Needless to say, biker/pedestrian safety and awareness wasn’t a major factor. So I perused Virginia’s driver education requirements and while it does mention safety and awareness, the driver’s manual only dedicates a half page in a 40 page document to sharing the road.

Avoiding mistakes and being aware of pedestrians and people on bikes just isn’t the same type of education that many bike education/advocacy groups distribute.

I recently read Safe Riding Tips from our friends over at BikeArlington and number six on the list is to make eye contact with motorists and pedestrians before crossing paths. This is a great tip and one I use daily, in any mode.

Another great driver education tip comes from the Netherlands where they teach the “Dutch Reach” which requires drivers to open their car door with their opposite hand, forcing their body to turn to look for cyclists. Cities left and right are asking their drivers to learn this simple trick – just yesterday, LA Mag (comparable to The Washingtonian) posted an article on bringing the reach to LA. Seems to me that driver education could incorporate even more tips like these to ensure safety for everyone.

As it stands, safety messaging in regards to active commutes blame the person walking or biking in an accident and takes a lot of responsibility off the driver. If anything, it discourages people to walk and bike through fear mongering. Only in the past few years have cities, TDM agencies and advocacy groups called out the blatant condemnation of these campaigns.

Even a local campaign termed “tired faces” misses the mark in safety and awareness. Ultimately blaming a person for wearing black and not even discussing the actions of the driver is 100% wrong. For fun, I did a little mock up to answer my internal question of “What if cars were ad-shamed in the same way as pedestrians or people on bikes? What would that look like?” It would probably look something like this. 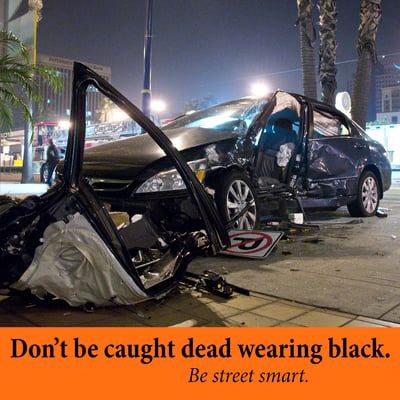 Does it even make sense? No! That’s how ridiculous pedestrian-shaming ads are. If people want to talk about a smart street campaign, then let’s look at People for Bikes and their Travel with Care campaign where they gave life to a mode. Or even this great video from the Port Authority of Allegheny County in Pittsburgh.

With a little humor and a great voiceover, sharing the road is easy to talk about and memorable without being reduced to finger pointing.

Simply put – there needs to be more campaigns like Pittsburgh and People for Bikes and less tired faces.

I don’t know for certain, but I think the SUV that pulled into the bike lane last night was dropping off passengers as part of an on-demand ride hailing service. Similar to providing equal education for drivers, pedestrians and people on bikes – ride-hailing companies like Uber and Lyft should invest in safety education for their drivers, so they can pass it on to passengers.

Honestly, I’ve targeted this group as ripe for education simply because of sheer volume and the probability that, like me, many didn’t grow up in a city with such a strong emphasis on bike and pedestrian infrastructure. Even a sticker on the inside windows reminding passengers to watch for cyclists, other cars and pedestrians could go a long way in preventing incidents like last night. However, it would be nice if those companies took a stronger community interest and went as far as to offer new driver webinars, speaking to the importance of sharing the road and what that statement actually means for on-demand drivers.

I mean, Lyft/Uber – if you’re reading this, we know some people. Holla at us.

Advocacy and education can look different for everyone when it comes to this topic – you could be a PAL Ambassador or maybe you just opt to have real conservations with friends. Either way, we all need to start caring about other modes now.

Not never because you don’t ride bikes.
Not in a few months when you have a close encounter, either as a driver or pedestrian.
And not in a year when your best friends gets hit.

We need to care now.