This post is part of a series highlighting the ART bus routes throughout Arlington County and how both residents and visitors alike can take advantage of the ART bus system. 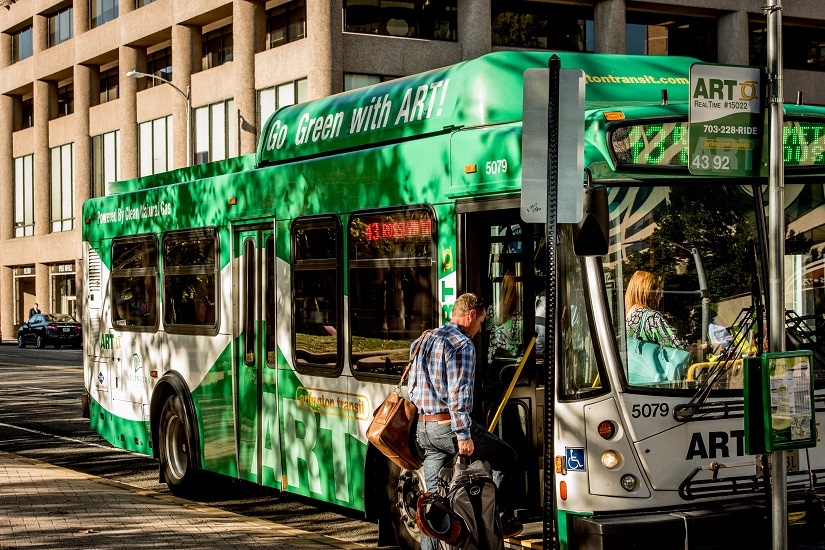 Ever since the introduction of the Silver Line to the Metro system, many commuters have taken advantage of new commuting options. However, a group of specific commuters were affected when the Silver Line was introduced – namely those who traveled between Courthouse, Rosslyn and Crystal City on a daily basis. Blue Line trains went from running almost every 6 minutes to now at most traveling every 12 minutes during peak periods. This made traveling between Courthouse and Crystal City timely.

The inclusion of ART 43 earlier this year created a route that reduced the commute between Courthouse/Rosslyn and Crystal City by a significant amount. No more need to wait for Blue Line trains; plus, riding the ART 43 gives you the added bonus of traveling above ground the whole way.

Before starting at Arlington Transportation Partners (ATP), I was one of many commuters riding an Orange or Silver Line train from Courthouse to Rosslyn and then watching as countless trains passed until my Blue Line train finally arrived. In March this year, the ART 43 began service and before I knew it I was using a new route that reduced my commute time by almost 10 minutes, allowing me to be multi-modal as I loaded my bike on the front of the ART bus and biked from Crystal City to Braddock Road Metro Station.

Whether using the ART 43 to simply travel to or from Crystal City or to ride the new Metroway to travel into Alexandria, there are many options the ART 43 can bring to your commute.

ART 43  bus timings can be a little tricky, so we recommend viewing the schedule below. Ultimately, there are 2 buses that run 10 minutes apart, followed by a 30 minute break. The 10 minute interval returns after the 30 minute gap and follows the same pattern again. ART 43 only runs during rush hour periods Monday through Friday. Bus service is not available on the weekends.

ART RealTime Arrivals are available through this ART specific Rider Tool. You can also click to view a print-friendly ART 43 route and schedule PDF.

The Crystal City VRE Station stop is the only stop on the line that does not coincide with the Metro and also happens to be right at the Crystal City Waterpark. The Waterpark is a great place to relax and eat lunch outdoors, I recommend utilizing it during National Walk at Lunch Day. The Crystal City BID (Gold Level Champion) also hosts events such as Monday Morning Yoga and Wine in the Water Park during certain times of the year. Also, it happens to be the location of the Bike to Work Day pit stop in Crystal City.

ART 43 isn’t just for residents or commuters. Visitors can also use the bus during the week to quickly travel between Courthouse, Rosslyn, and Crystal City (don’t forget the bus only runs during rush hour Monday through Friday). This can be a way to bypass the Blue Line and quickly travel between major Urban Villages.

If you are visitor to Arlington County, be sure to visit our friends over at Stay Arlington for even more information on activities, hotels, culture, and more.