Arlington Could Use Bike Boxes

I commute by bike every day from Northeast DC to ATP’s offices in Rosslyn and throughout my ride, I find myself constantly scanning and making mental notes about road abnormalities that could cause problems for me. I file these observations away and they allow me to visualize my commute when I’m not on my bike. Uneven pavement joint here, obscured view there, take the lane ahead to avoid the door zone of parked cars. Part of this practice is to build familiarity with my route and minimize unknown factors. The better I know my route, the safer I can be by recognizing and avoiding hazards when they appear. On top of increasing my awareness of my daily route, I often try to think on ways the bike infrastructure can be improved to make cycling safer, more enjoyable, and more practical for more people. DC’s bike mode share has boomed since 1990, can better infrastructure grow this number even more throughout the metro region?

On a recent trip back to NYC, I was excited to see the new Citibike bike share system being put to use but I also developed a deeper appreciation for “Bike Boxes” or “Advanced Stop Lines.” My current commute doesn’t offer me the opportunity to use these ingenious road design features (although there are some bike boxes in DC) but watching them utilized in New York made me pretty envious.

Bike boxes allow cyclists to pull up in front of automobile traffic at a stop light to allow them to be more easily seen, make safer turns onto adjacent streets, and get a head start to build up speed when the light turns green. There are variations on this theme; some bike boxes uses separate signal lights for bicycles and cars while others utilize a shared traffic light. Regardless, research has shown bike boxes to improve cyclist safety. 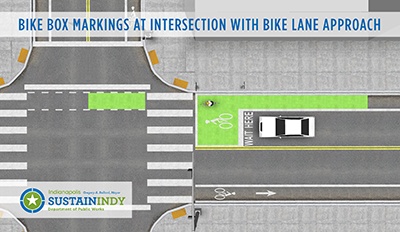 My daily commute takes me up Wilson Boulevard in Rosslyn and requires me to cross numerous intersections. Due to signal light timing, cyclists inevitably hit red lights climbing the Wilson hill. When traffic is sparse enough, cyclists often ride past waiting cars, scan the intersection, and safely execute an Idaho Stop. This may anger some motorists and rile them up into thinking cyclists are no-good scofflaws but consider the alternative: motorists would likely be even more upset with cyclists if they all unclipped, dismounted, and waited for the traffic lights to turn green before mounting up and riding again. This can cause a backup of cars behind cyclists as they pedal up to speed again. Honking horns would surely ensue.

Now, if Arlington could implement bike boxes, cyclists could get a safe and legal head start on car traffic and build up momentum before cars are on their tails. Separate traffic signals for bikes and cars may be too much to ask for at this point but there’s always hoping, right? Hopefully this development will be the forerunner of Arlington bike boxes. What do you say? Would bike boxes be a boon to Arlington County?