On Sunday, April 17, the Transitway opened in Crystal City. Even though Metroway buses have been in operation since 2015, the new BRT allows for a faster, more efficient commute.

What is Bus Rapid Transit (BRT)? 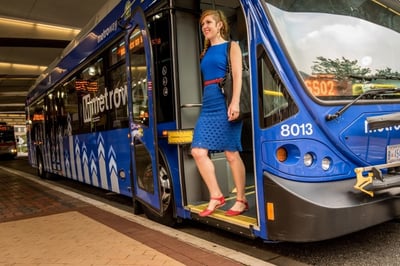 BRT is a system of dedicated bus lanes that allows buses to travel without any traffic. Think of it like an aboveground metro with tires and stations with cool real-time arrival information. The BRT system allows passengers to get to their destinations faster, as well as provide higher quality and more practical bus stops.

The official name for Northern Virginia’s first BRT system is the Crystal City Potomac Yard Transitway but you will probably come to know it as Metroway.

The buses run frequently during rush hour periods, at intervals of only 6 minutes. The dedicated lanes allow them to travel unimpeded by the normal obstacles of driving.

Since April 1, the buses now also travel all the way to Pentagon City, allowing passengers to reach the Pentagon City mall and tons of restaurants.

How much does it cost?

Riding on Metroway costs the same as any other Metrobus, just $1.75 one way.

You said every 6 minutes, does the bus always run that often?

The bus runs every 6 minutes during rush hour periods which are 6-9AM and 3:30-7PM. At other times of day, the Metroway runs at 12 minute intervals.

So where can the bus take me?

Even though Crystal City and Braddock Road are serviced by Metro Stations, the Metroway connects riders to much more. Since the Crystal City Metro Station is located in the northern part of Crystal City, the bus travels directly through Potomac Yard, making it the best way to reach Target, the movie theater and other great shopping options and restaurants along Route 1.

Beyond Potomac Yard, the bus can also serve as a last mile connection between metro stations and final destinations such as offices located within Potomac Yard and in southern Crystal City.

Additional questions on how to get around using Metroway? Just email us at solutions@transpartners.com.