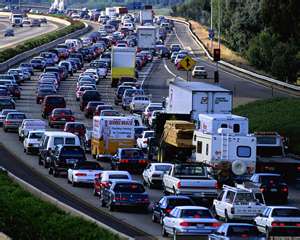 The Today Show highlighted the worst commuting cities for drivers yesterday and DC lead the pack with 71 hours lost per driver per day. As much as we all want to see the economy completely recover we would probably prefer to have it not affect our commute. The truth however, is it will. Apparently, as Tom Costello reported,  we commute 5 hours less per year due to the poor economy and less people on the road.

I don't drive to work - I Metro - so surely there have to be some metrics as to how the rebounded economy will prolong my commute. I think I experience a version of it when I compare my commute on Monday mornings with my commute on Tuesday mornings. Mondays I can sit if I like and maybe even have an open seat next to me for part of the ride. On Tuesdays, I consider it a lucky commuting day if I can weasel my way to a pole/chair back to hold onto for the duration of my trip.

The nice thing about living in this region, even though the traffic is considered the worst in the nation, is we have choices. I could drive, but unsure about the unpredictability of the six miles, I Metro. Now that the weather has cooled, I have been known to bike to work. On the day of the earthquake, I even Capital Bikeshared home. If none of that worked, heck, I could even walk across the Key Bridge to Georgetown and take the Circulator home. Even if you live further out in the hinterlands, maybe you could carpool with an acquaintance in your building or find a vanpool or talk to your employer about teleworking one day per week.

Tom Costello stated that one of the ways people could mitigate their traffic headache is to look into flexible schedules and joked that a 4am start time might not be so bad. Although I wholeheartedly believe that flexible schedules are a great option in the workplace and should be looked at, I think it's also important to take control of your commute and know your options. Options for me mean freedom, and when the economy completely rebounds, you'll see me either on the Metro, my bike, the bus or working from home!