Arlington Transportation Partners
Home >> Blog >> Getting on the Bus: My First Day

Getting on the Bus: My First Day

Ayanna Jacobs July 27, 2015 Ayanna Jacobs works in Development at Arlington Free Clinic. As a new college grad, she enjoys spending her free time reading all the books she couldn’t read while in school, and going on runs through the neighborhood.
SHARE
Facebook Twitter LinkedIn
ATP TAKEAWAY: Trying public transportation for the first time can be hard, but ATP can help you create a custom commute and even suggest real-time tools to get you to work on time!

I’ll be honest. The first day I tried to use public transportation to commute to work on my first day of work (also my second day living in Arlington) was a complete disaster. I live in Crystal City and work about three miles away at Arlington Free Clinic on Columbia Pike. It should have been easy. But I was new to Arlington and unfamiliar with staple landmarks like Pentagon City Metro/Bus Station. 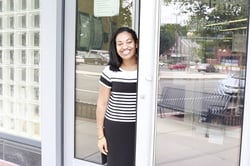 I left my apartment about an hour before I needed to be at work, and seeing that it was a nice day, decided to skip the suggested Blue or Yellow Line Metro to the bus stop, and walk instead. Google Maps was the first navigation aid I tried.

Unfortunately, Google Maps inadvertently took me past Pentagon City Station, to somewhere on Army Navy Drive. By the time I finally made it to my bus stop, I was tired, hot and confused. I managed to get on the right bus and even arrived at my first day of work a little early. But it had still taken me over 45 minutes to go 3 miles. I was discouraged and feared that I would absolutely need a car for my commute. I texted my mom later that evening with a fair share of melodrama: “I can’t live like this!”

If you’ve had a similar experience, my advice is not to get discouraged. I’ve been using a combination of Metro and Metrobus to get to work for about three weeks now, but it took only about three days for my commute to become seamless. I now use Pentagon City Metro Station as my regular bus stop (which I discovered by happy accident on my second day of work).

Another discovery that helped make my commute easier was CityMapper, which I now use daily. It just seems to know Arlington a little better and much more than I do. CityMapper gives suggested routes, bus-only routes and rain safe routes. And – as an extra perk – it estimates the amount of calories you might burn by walking or riding a bike. I would highly recommend it.

As new college graduates, most of my friends already living in the area do not own cars and use public transportation to get to work. But I had spent the past four years in a small, college town where the farthest place you might want to go was a 10 minute walk away.  So, when I moved to Arlington a few weeks ago without a car, I was not looking forward to becoming a regular user of public transit.

In these past three weeks, though, I’ve come to enjoy my morning commute to work. It’s a routine I depend on and have gotten used to. I take the 16G from Pentagon City, which comes every 15 minutes. I usually Metro to the bus stop, but on nice mornings I enjoy a pleasant walk from my apartment. The entire trip is all under 30 minutes!

I also enjoy seeing the familiar faces who take more or less the same route as I do. There’s the pleasant bearded guy at the bus stop who waits in the seat farthest to the left listening to music. There’s the woman who always wears her hair in a bun. There are the same few rotating bus drivers. Occasionally I’ll even bump into one of my co-workers and we’ll chat about our evenings, weekends or the weather.

Not having a car in Arlington has turned out to be a great thing. I feel a little more connected to the city using public transit. A little bit more invested. A little more at home. Arlington is a really wonderful community, and it’s nice to know that I’m doing what I can to reduce my carbon footprint, and make the streets a little less crowded for everyone.

If you're interested in writing for ATP, email solutions@transpartners.com. Authors of all published blogs will receive a coffee giftcard and will be entered into our monthly blog raffle to win a $50 Amazon gift card.