How I Commute to Work: Elizabeth

Elizabeth A. Denton
Twitter
March 26, 2015 Elizabeth A. Denton is a former Business Development Manager at Arlington Transportation Partners.
SHARE
Facebook Twitter LinkedIn
ATP TAKEAWAY: One of the greatest benefits to living and working in Arlington is that your commute is filled with a multitude of options - from bike to bus to Metro to Capital Bikeshare!

I am pretty spoiled because I live just about three miles from the ATP office in Rosslyn and I have many options to get to work. I prefer to bike, but there are a few bus routes plus the Orange and Silver Metro Lines. Or I could pick up a Capital Bikeshare bike, if I want to bike but not with my own bicycle. It’s great to have so many options, because I often need some flexibility.

Bike
I’ve been biking to work for a while now, so much so that if I don’t get to bike for a while, I start to get cranky! I have a pretty easy 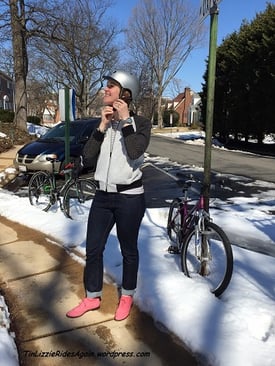 commute – just under three miles. The first mile is through neighborhoods in Ballston, then on Clarendon Blvd in the bike lanes, to the ATP office in Rosslyn. I could use the Custis Trail to get to work; it is a bit longer and has more hills making it a better workout, but let’s be honest – I just want to get to work quickly. I also prefer the street scene; I like to see the stores and restaurants and all the “urban” life. It’s a great way to know what is going on in my neighborhood. I bike to the gym on my way home for some weight lifting or yoga, but I generally count my bike ride as my daily 30 minutes of cardio.

Bus
There are only a few things that prevent me from biking to work; lately, it’s been the snow and ice. I just don’t feel comfortable biking on icy streets. Instead, I walk three blocks to a bus stop and hop on a Metrobus that drops me off almost in front of our office building. I use my iCommute DC app to tell me when the bus is coming so I don’t have to wait outside for too long. Sometimes, if I am going into DC in the evening, or meet friends who don’t bike to work, I’ll take the bus to work instead knowing that I can take the Metro home in the evening. The bus takes about the same amount of time as my bike ride, but I don’t like being dependent on its schedule and I miss my little workout. I can also walk towards Ballston Metro Station and pick up a few different buses there, so I have a bus backup plan to my bus backup plan.

Metro
I live almost halfway between Metro Stations, so I can pick either, depending on which direction I’m headed. I generally take Metro if my day starts in DC. The addition of the Silver Line has doubled my train options, so I rarely have to wait for a train. But here’s a secret: if an approaching Orange Line train is closely followed by the Silver Line, I’ll wait for the Silver. It’s usually less crowded!

Capital Bikeshare
I honestly don’t remember to take Capital Bikeshare as a backup option as often as I should because it’s ever so slightly less convenient than the bus for me. But if I want to bike to work but don’t want to have my bike at work later, Capital Bikeshare is an obvious option.

With so many different options, I can’t imagine driving to work. It’s so much easier to jump on my bike, avoid traffic, get some exercise, be in control of my time and get to work awake and alert. I have to plan ahead for each day’s option, but I usually pick the clothing I’m going to wear and pack my lunch the night before as well – so planning for bike, bus or Metro is just part of my evening routine.