Arlington Transportation Partners
Home >> Blog >> How I Commute To Work...Interrupted

How I Commute To Work...Interrupted Brendan Casey
Twitter
August 5, 2015 Brendan Casey is a former Business Development Manager for Arlington Transportation Partners.
SHARE
Facebook Twitter LinkedIn
ATP TAKEAWAY: You never know what can happen when you're on the road, and knowing your rights when you face the unexpected can go a long way. Accidents like this shows the urgency in laws and awareness needed to protect bikers and pedestrians on the streets.

As part of our “How I Commute” series, it was Business Development Manager, Brendan Casey's, turn to share his story. Soon after I made the request, he was hit in a crosswalk while riding his bike on his commute home.

As ATP’s Marketing Manager, Brendan’s story was valuable content. Not because it could result in pageviews, but rather because Arlington Transportation Partners is an advocate for active and sustainable transportation and his story highlighted an important question.

What happens when a [bike/bus/walk/insert your transit option] advocate has a dangerous experience on his commute?

The answer is simple. You tell your story and hope that anyone who reads, shares or comments on this blog learns something positive. And if you’re lucky, that a culture and/or policy shift occurs to better support your advocacy.

So, without further ado…this is Brendan’s story.

Road safety is something that should matter to everyone. Unfortunately, it is not always present in our daily thoughts. Regardless of how you choose to get around, everyone inevitably interacts with the streetscape and other people. You hope, these interactions will be uneventful, but that just can’t be guaranteed. Some cities are starting to address the issue by Vision Zero or through other measures; but in many cases, these issues aren't being addressed in conjunction with the increase in cycling for transport.

The unimaginable happens daily and it’s not just how we react in the moment, but also how we react for the future. I had a harrowing experience in May that brought all of this to the forefront of my mind. 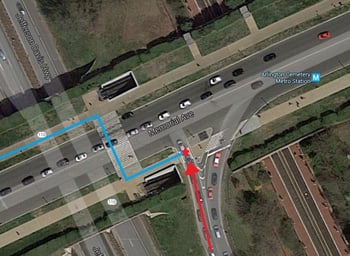 My daily bike commute takes me around Arlington National Cemetery and across Arlington Memorial Bridge. This stretch of my ride is on mixed use trails and typically safe, with the exception of a few crosswalks where drivers, cyclists and pedestrians converge.

On my way home, I ride around the cemetery, head East along the Memorial Avenue sidewalks and use the crosswalk near the Arlington Cemetery Metro Station to access the South side of Memorial Avenue. Check out the image to right to better understand my route, which is highlighted in blue.

I came to the crosswalk where the Route 110 ramp meets Memorial Avenue and slowed down since my view is obstructed by a cement structure that surrounds the Metro escalator. I rolled up to the crosswalk and saw a white SUV approaching from the bottom of the ramp. The driver was decelerating as she approached the stop sign and crosswalk, before turning left on Memorial Avenue. As I entered the crosswalk, I saw the driver looking to her right but not to the left where pedestrians and cyclists were entering the sidewalk. Instead of coming to a full stop, the driver yielded and continued to make her left turn. Only as the driver entered the crosswalk, did she look to her left to check for traffic. As she did so, she saw me and my blinky lights and slammed on her brakes.

Unfortunately, it was too late and the front of the car made contact with my leg and the back of my bike. The jolt knocked the back end of my bike out from under me, but I was able to catch myself without completely falling over. My mind was racing, and I was unsure if I was okay.

The driver seemed shocked as well; however, became upset when I asked for contact and insurance information. Concerned she might leave the scene, I took a picture of her license plate. She suggested we relocate as not to impede traffic from Route 110; I agreed and carefully walked my bike across the street to continue speaking with her. She further questioned why I needed her information since I didn’t appear to be injured. With my adrenaline pumping from the collision, I couldn’t be certain that I wasn’t hurt or that my bike wasn’t damaged. She said in order to obtain her details, I would need to call the police.

About ten minutes after calling 911, a US Park Police officer arrived and asked if I was okay. I said I didn’t know but I knew I wasn’t bleeding. He then left me to speak with the driver. After a few minutes of interviewing the driver, the officer walked back over to me, presumably to take my statement about the incident. Instead, he stated I was at fault by not dismounting my bike before using the crosswalk.

I was incredulous for two reasons:

1.    The officer had not asked for my statement regarding the crash.
2.    There is no Virginia requirement for cyclists to dismount in a crosswalk.

He further asserted that DC law requires cyclists to dismount, at which point I politely reminded him that the crash occurred in Virginia.

At this point, the officer said we could handle the situation one of two ways:

I requested the written report, knowing just how important they are in traffic studies which can lead to safer redesigns of our roadways. Without the report, the crash would never be recorded as an example of the poor road design. In return, the officer gave me a citation for “disobeying a signal device” despite there being no signal device at the crosswalk. Below is my original ticket and an excerpt of my traffic incident report I finally received at the end of June. I always wanted to redact something. Now I can say I have. 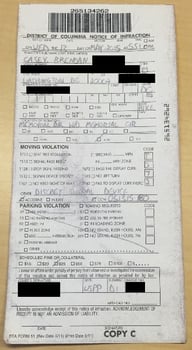 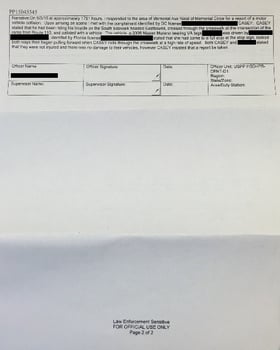 I took my ticket but realized that my “learning experience” probably isn’t all that unusual. How many minor car-on-bike/pedestrian accidents go unreported if a victim isn’t gravely injured? I made sure to call Bruce Deming, The Bike Lawyer,  (and also an ATP Champion) to get his professional opinion afterwards.

So yes, my commute home one afternoon didn’t go quite as planned, but that hasn’t prevented me from continuing to commute by bike. This “learning experience” further supports my belief that many of our streets are in need of better design. Also, many users need more information about the laws and how we share our streets regardless if you are driving a car, biking or walking. Even in a larger metro area like DC, we need to be looking out for each other - if not figuratively, then literally.

Tags: Bike, How I Commute to Work, Arlington County, Commute