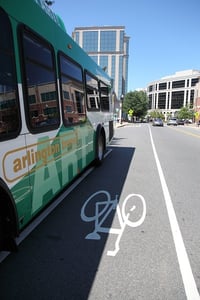 It’s about to get easier to travel between Crystal City and the Rosslyn-Ballston corridor during rush hour! Three new bus routes go into effect on Sunday, March 31, providing employees and residents in the County more options for their daily commute. In addition to taking Metro’s Blue Line, riders will now be able to travel by bus on the new ART 43 route as well as the Metrobus 10R and Metrobus 10S lines.

For riders looking for a one seat ride between Crystal City and Courthouse, the ART 43 is a great option during the morning and evening rush hours without having to transfer Metro lines. The route will only stop at five locations, which include the Crystal City Metro, Crystal City VRE, Rosslyn Metro and Court House Metro, making it a fast and convenient option for commuters who live and work in these areas. 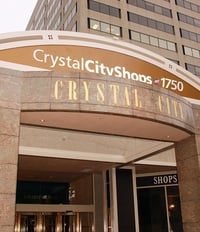 Metrobus is also starting two new bus routes along the Blue Line on Sunday – the 10R will provide service during rush hours between Alexandria, Crystal City and Rosslyn, while the 10S will travel between Braddock Road Metro and Rosslyn Metro with stops in Potomac Yard and Crystal City.

For riders traveling between Rosslyn and Crystal City, these three routes combined will provide bus service about every ten minutes during the morning and evening rush hours. In addition, with the upcoming Silver Line’s impact on the frequency of the Blue Line, the ART 43, 10R and 10S will be great alternatives for those traveling between Crystal City, Rosslyn and Courthouse!

Spread the word at your office or property and take advantage of even more transportation options in Arlington!