The Link Between Transit and Public Health

Elizabeth A. Denton
Twitter
September 27, 2012 Elizabeth A. Denton is a former Business Development Manager at Arlington Transportation Partners.
SHARE
Facebook Twitter LinkedIn
ATP TAKEAWAY: The evidence is piling up about the importance of exercise, and your daily commute is the easiest way to add in whatever you can.

After listening to Dr. Richard J. Jackson, MD, MPH, speak at this summer’s Association for Commuter Transportation annual conference, our office was inspired to watch his recent four-part series, “Designing Healthy Communities”. Every other week, we have gathered with our lunches to watch each hour-long episode, and to discuss the connections between the growing health crisis in America, transportation, healthy communities, and urban planning. It has been inspiring and educational, and increasingly obvious to us that public transportation is a key component to improving health.

The numbers about the health crisis in this country are somewhat staggering. A recent report released by the Trust for America’s Health and the Robert Wood Johnson Foundation estimated that by 2030, all 50 states will have an obesity rate of 44% or higher. The New York Times reported earlier this year on a report that states that one in four teens is on the verge of developing Type 2 diabetes, a number that has tripled in the last decade. Unhealthy school lunches, increased time sitting in front of computers and televisions, and lack of ways to exercise mean that young people today are growing into adults with serious health problems, which will affect the nation in several different ways. Even military leaders have expressed concern that a quarter of all Americans will be disqualified because they exceed weight requirements. Although New York City Mayor Michael Bloomberg’s ban on super-sized sugary drinks is well meaning (and controversial), it raises the debate on how best to tackle this problem before it gets any worse. 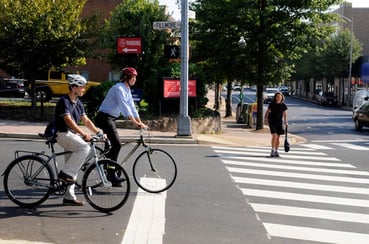 Amazingly, there has been little attention paid to the easiest way to solve many of the health problems facing America’s population: exercise. But experts are beginning to catch on: Dr. Mike Evans has a great video on YouTube explaining how research has shown the health benefits to a mere 30 minutes of exercise a day. In the middle of the video is a section on transportation, pointing out that getting off your bus a stop early to lengthen your walk to the office is a simple way to add more exercise. He also cited a Japanese study that showed walking to work 20 minutes or more decreased high blood pressure by 29%. A study from the UK showed that giving free bus passes to adults aged 60 and over encouraged them to be more physically active, and more inclined to bike and walk as well as take public transportation. Because incremental amounts of exercise over the course of a day are just as beneficial as a 30 minute slog on the treadmill in a gym, walking to the bus, riding a bike to a metro station, and walking around at lunch all add up to long term health improvements.

The evidence is piling up about the importance of exercise, and your daily commute (PDF, 199KB) is the easiest way to add in whatever you can. Walking to a bus or Metro station, biking and walking, even parking your car as far away from your office as possible and walking a bit further, all add time to the optimal 30 minutes of day we should all be getting. Incorporating minor amounts of activity into your routine means less time in the gym, too. The cooler weather makes the perfect opportunity to dedicate a few days a week to getting out of the car more. Your blood pressure, heart, lungs, mind, and waistline will all thank you!