ATP Takeaway: Columbia Pike is one of the busiest roads in Arlington County. Learn about the plans to make it safer for people travelling by all the modes.

Right now, Columbia Pike is undergoing a major renovation plan known as Columba Pike Multimodal Street Improvements. It’s the reason for the construction you may have observed on the west end of Columbia Pike between the Four Mile Run bridge and South Jefferson Street.

The project has two main components—underground work to replace old pipes and bury utilities that are currently above ground, and street improvements to make the Pike safe for people travelling by car, bike, bus, or on foot. Take a look at what’s in store. 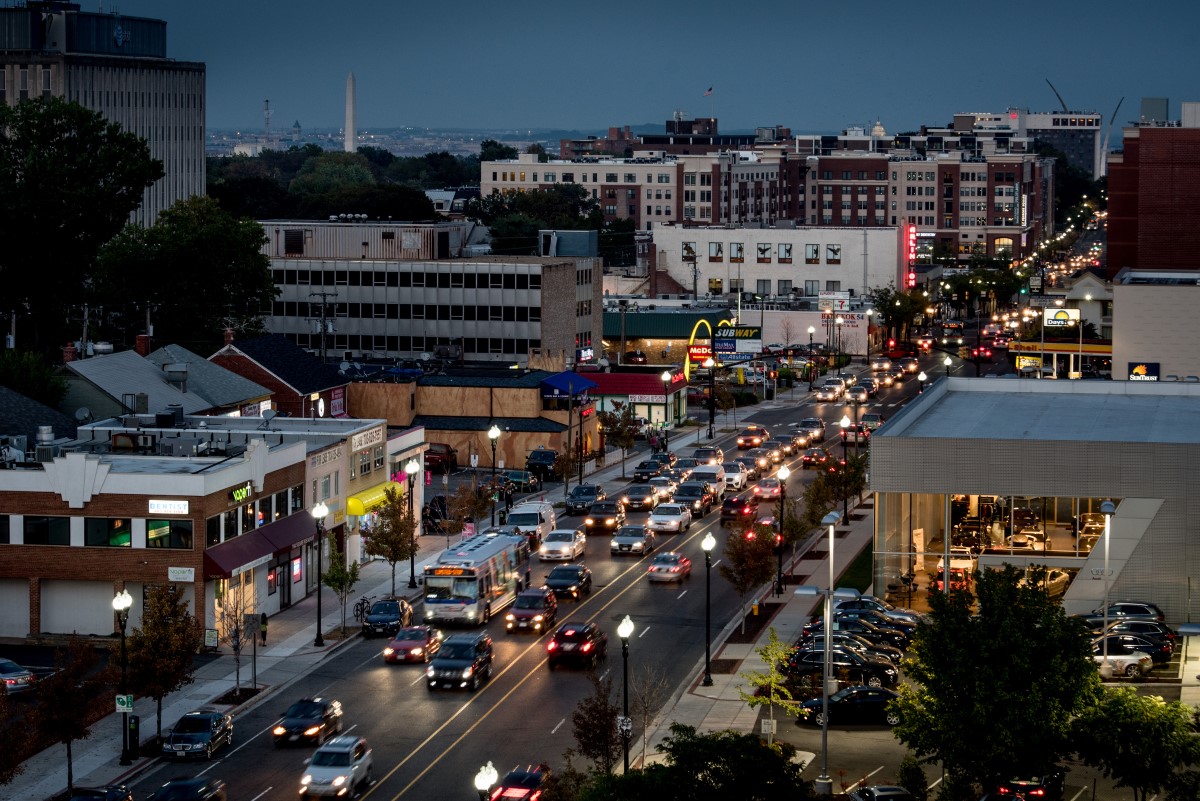 Pike Ride is a set of nine bus routes that run along Columbia Pike, connecting people from Annandale in Fairfax County, all the way to Farragut Square in Washington, DC. This makes it the busiest bus corridor in the Northern Virginia area as it services Metrorail stations and neighborhoods in between.

Concrete bus pads at bus stops along Columbia Pike will be able to hold the weight of buses as they make frequent stops. Wider sidewalks at some segments will allow more people to easily access crosswalks and bus stops.

The County also plans to install new sheltered transit stations and improved signage along the Pike to make sure passengers can wait for their rides protected from the elements. Transit stations are a bit larger than traditional bus stops, and have amenities such as larger waiting areas, real-time arrival information, and lighting. Concrete pads at transit stations will be able to hold the weight of buses as they make frequent stops. These new installations will also be circumventable by people in wheelchairs or other personal mobility devices.

While Columbia Pike is too narrow in most places to comfortably add bike lanes, there are streets parallel to it with less vehicle traffic that are well suited for bike traffic which have been dubbed the Columbia Pike Bike Boulevards.

In addition to making it easier for travelers to choose to bike or bus, there are plans to make walking along the Columbia Pike better for people who want to get around on foot. New crosswalks and signals will make it easier for people to communicate their presence to others using the road and get around safely.

The whole look and feel of the Pike will also be upgraded. New lights, traffic signals, and trees will be installed, as well as wider sidewalks for people to travel more easily. Part of this process will include moving some utilities underground.This will result in construction work on Columbia Pike that will affect traffic.

Traffic Changes Due to Construction

There will be construction on the Columbia Pike roadway between Four Mile Run Dr and the county line at South Jefferson Street. Traffic will be limited to one lane in each direction, with an additional eastbound lane open during morning rush hour; left turns will be prohibited during construction. for The traffic pattern changes started on December 27 and will last for about a year.

While this work is going on, consider using other routes or modes to alleviate traffic on these segments when traveling through the area, and leave the road available for local residents and business patrons. You can stay informed of updates on the County's project page.

Stay in the Know

Columbia Pike has so much to offer in terms of dining, entertainment, and community. This project will help more people enjoy the Pike safely and efficiently. Arlington Transportation Partners can help property managers stay informed and be able to explain the presence of trucks and cones in meantime.

Editor's Note: This blog was updated on February 13, 2020 with new information written by Claudia Pors.